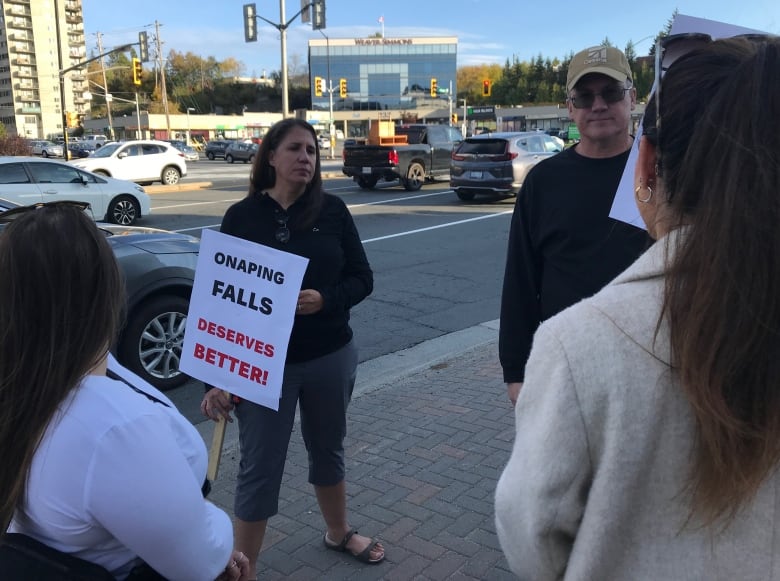 A group of protesters concerned about declining service levels in Sudbury’s outlying communities marched outside Tom Davies Square on Tuesday.

With less than three weeks before municipal elections, a group of about six sign holders said they want the mayoral candidates to address their concerns.

Arlie Matheson, a tech worker, recently moved from Dowling to a unit in Sudbury’s west end. He said the eight candidates in Sudbury’s mayoral race are missing a golden opportunity to appeal to small-town voters.

“Anyone who wants to come forward and offer to say, ‘hey we’re going to improve services in the outer areas’ – that’s going to get support from those areas for them,” he said.

“It’s a dedicated voter base.”

Matheson said transit is a big issue for him, because coming from Dowling was “impossibly difficult.”

“I depend on the bus to get around,” Mathieson said.

He added that Dowling’s bus service is sparse, at best.

“There are four hours between it [buses] To catch a cab that brings us to another bus stop that will connect us to the city.”

Chantel Gorham, an Onaping Falls business owner who organized the march, said residents of that community are concerned about safety because of the lack of police patrols there.

“The police should know that we deserve a regular police presence,” he said.

“They should know with the number of accidents that happen in the general area that this should be a priority, but it’s not,” Gorham said, referring to recent accidents near a rail crossing on Highway 144. said while giving

Gorham said the condition of sidewalks, streets and parks in Onaping has also declined significantly since it merged with Greater Sudbury nearly two decades ago.

“We really feel like we’re not being heard or seen and our communities certainly reflect that.”

“I think what they’re here for is desperately needed,” Gravel said. “The farther you go, the less they feel the city listens to what they’re saying.”

Gravel has heard of fire safety concerns in Whitefish and Beaver Lake in the western part of Greater Sudbury, where he said the fire department is “half staffed.”

“This is becoming a serious concern for the safety of the residents of this city,” he said.

The municipal corporation election is on October 24.