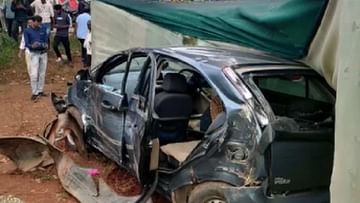 In an accident at Shettigere Cross in Chikkaballapur taluka, two women from Andhra were killed when the women standing near their car were hit by another car.

Chikkaballapur : In an accident at Shettigere Cross in Chikkaballapur taluka, two women from Andhra were killed when the women standing near their car were hit by another car. Laborers Sabrishamma (30) and Nagamma (70) died. Women were coming to Bangalore from Andhra Pradesh. As it was raining, he stopped the car on the side of the road and got down. They went down to cover the contents of the car with a tarpaulin. This time another car fell down and two women died. A case has been registered at Peresandra Police Station in this regard.

Car collides with two-wheeler parked on road side: One dies

Chikkaballapur : A two-wheeler parked on the side of the road was hit by a car, killing the two-wheeler on the spot while the condition of another is critical. The name of the deceased is Suresh (29, Res. Diplya). Madan’s condition in Chintamani is critical. Both these youths were working at Ramu Furniture in Chikkaballapur. Three people in the car are safe. The people in the car were chased by locals.

caravan: A serial accident involving two buses, a car and a bike took place on Court Road in Honnavara in Uttara Kannada district. Fortunately, the passengers are safe in this accident. The accident took place when the brakes of a KSRTC bus going from Kumtha side to Honnavar bus stand failed. The incident has been reported at Honnavar Police Station.

Car collides with two-wheeler crossing the road: One child dies

Vijayapura: An incident took place near Managuli village in Basavanbagewadi taluk of the district when a car hit a two-wheeler crossing the road and the child who was sitting behind the two-wheeler died on the spot. The dead boy’s name is Riyaz (12). Managuli met the station police and inspected the place. A case has been registered in Manguli police station in this regard.

Dharwad: The bodies of husband and wife were found suspiciously in a field in Chikkamalligawada village. Wife Sridevi has been murdered and her husband Raju Ramapura is suspected to have hanged her. Suspecting his wife’s chastity, the husband killed his wife and committed suicide. The body of husband Raju Ramapura was found hanging next to his wife. This incident took place in Dharwad Rural Police Station.

Tosha Khana case: Imran does not appear on the bill. TT News

Death toll from earthquakes in Turkey and Syria reaches 4,372 as Turkish president declares a week of mourning TT News